The Boguins are a species of penguin-like creatures that work under Buccanary. Their primary function is to provide Otus with useful upgrades, as demonstrated in Buccanary’s shop, or to provide comic relief. One Boguin, found in the Owl Temple Entrance, teaches Otus how to dodge-roll, although this feature is already present before meeting them.

The Boguins present in the game are all brothers. They have high energy, and are sometimes very chipper to the point of being ominous, particularly when happily stating things that would otherwise be frightening. They seem to have a fear of Buccanary’s wrath, one even referring to themselves as “Buccanary’s punching bag.”

Their catchphrase is “Bah!” This was due to Simon’s tendency to vocalize what he believed the animated sprites were saying. [1]

Buccanary keeps one Boguin in the back with a number of trinkets. When an adventurer comes in with enough Buccanary Coins, it is the Boguin's job to come out and present the adventurer's new Trinket. Buccanary does not allow him to leave, nor does she allow him to talk to people who come and visit them in the back.

Once Otus locates and rescues two of these Boguins at the request of the third, the Cannon Minigame is unlocked. Upon completion of the minigame, they will give Otus all of the Buccanary Coins they have, and request for him to not tell Buccanary about it. One Boguin will also give Otus a shell that supposedly lets you hear the voices of the departed.

One of the Boguins' sprite sheets. 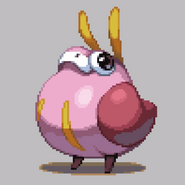 Behold! The Pegnorf.
Add a photo to this gallery

Retrieved from "https://owlboy.fandom.com/wiki/Boguin?oldid=932"
Community content is available under CC-BY-SA unless otherwise noted.