Kaboons are enemies from Owlboy. They can be found in the Floating Continent, in the Molten section.

Kaboons are monkey-like animals with purple fur, white markings on their arms and head, large furless hands with gold bracelets, and vestigial arms coming off of their backs.

Each Kaboon pack is led by a Kaboon King, which is much larger than the other Kaboons. It has similar white markings on its fur, furless hands and gold bracelets, but also has prominent ears, green fur, and its vestigial arms are much more developed, with muscles and individual fingers. (it also resembles simisage from pokemon)

Kaboons climb along the ceiling, or can drop down and jump across the ground.

In the Floating Continent lava section, there is a mandatory Kaboon gauntlet room. Before Otus enters the room, there is a short cutscene where Dirk, who Otus and friends have been following, throws a knife at the Kaboon King and quickly escapes. Otus then enters the room, and the King misdirects his anger at Dirk towards Otus, and many waves of Kaboons attack him. The first wave has one Kaboon, with each wave increasing in number until the final wave of six Kaboons.

Both very territorial and very curious, these creatures prefer to swing through the air with their powerful forearms, and have to resort to hopping when on the ground. Kaboons prefer to grapple their opponents into submission. They have two sets of arms, but the second set never fully grows unless a Kaboon becomes an king. When an king takes charge of the pack, it grows massively in size and the rest of the pack will fiercely protect it.[1] 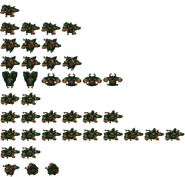 Spritesheet of the Kaboon Alpha.
Add a photo to this gallery

Retrieved from "https://owlboy.fandom.com/wiki/Kaboon?oldid=1153"
Community content is available under CC-BY-SA unless otherwise noted.