Black
Otus is the main playable character of Owlboy.

Otus is the protagonist of the story. A young owl who was born mute, he studies under his strict owl mentor, Asio. An owl cloak that he was given during his training makes him capable of flight. However, he is poorly regarded in the village of Vellie and is considered an unworthy successor to the Owl's heritage. His best friend is Geddy, and Otus frequently goes patrolling with him, with Otus carrying Geddy by his shoulders. On his journey, he meets other companions who join him to support him in his quest.

In the game, Otus is one of the 4 main characters, his only abilities being that of flight and a spinning attack, which is only capable of stunning enemies. Without the help of his friends he gains throughout his journey, Otus would not be able to get past certain obstacles. However, this is the same for the other characters: Without Otus, none of the main characters would be able to reach high-flying platforms, making Otus one of the most important members in the group.

Otus has brown hair, additional hair on his cheeks and two yellow feathers protruding from his head. He sports a white turtleneck along with a yellow-green vest. He wears beige pants and brown boots. He also wears silver gauntlets and an owl cloak that his mentor Asio had given him during his studies. Otus has black eyes and a pink nose. Despite his reputation of being clumsy and supposedly slacking off, Otus keeps a small, bright smile on his face.

It is worth noting that like Asio and unlike Solus, Strix, Fib or Bonacci, Otus has more human-like features.

Otus is very insecure and timid. A key aspect of his personality is his sensitivity, which makes him vulnerable to criticism and prone worrying about other peoples' opinions of him. Asio's overbearing nature made matters worse, causing him to think very little of himself, even causing nightmares based on peoples' imagined dislike for him. His sensitivity is also an asset as it makes him empathic, understanding, and forgiving.

Since he is a mute, Otus expresses himself through his body language and facial expressions. To express approval and/or happiness, Otus puts his hands on his hips and flashes a big smile. To express disapproval and/or anger, Otus takes an aggressive stance and ruffles his feathers. When he is nervous he wraps his cape around himself, and when he is sad, his "ears" droop. If one pays attention, it is possible to hear him make whistle noises, particularly when answering to yes/no questions.

Considering his interactions with others, on one hand Otus can be perceived as docile and eager to prove his worth; on the other hand, he can be perceived as clumsy, unreliable and supposedly an "idiot" (according to Fib and Bonacci, who often taunt him based on his muteness and low academic performance). He is also said to get into the wrong sort of troubles[1] and is described as thick-skinned[2].

He has a huge collection of books in his house suggesting that he might be a bibliophile. He also does not handle teleportation well. Flying is his main ability, and being unable to do so in the Owl Library makes him very upset.

Asio is Otus's mentor. Asio had high expectations of Otus, and in the beginning intended to make Otus much like himself. However, when Otus repeatedly failed to meet his expectations, Asio grew agitated and somewhat resentful. As time went on he became more strict with Otus and scolded him often. His student's continued failures made Asio lose faith in him and his abilities, resulting in Asio refusing to listen to him and even going as far as to say that Otus was a shame to owls everywhere, and that he brought great shame upon Asio himself. Otus is generally nervous around Asio.

Near the end of the game, however, their relationship becomes more amiable. Asio comes to realize that most of the things he scolded Otus for were out of his control, and that he had treated Otus very poorly. He also feels immense guilt over the fact that he almost cost Otus his life in Advent based on an ignorant decision he made by locking Otus inside a building so he "wouldn't do anything stupid". Asio proceeds to hug Otus, apologizing for everything that he'd done. In the end he says that he would remain in Vellie to protect it no matter what, as it was their home. He also tells Otus to be careful.

Since it is established that Otus has no mother or father currently in his life, Otus may view Asio as the closest thing he has to parent. He is shown to crave his approval and is very upset when he does not live up to his expectations.

During the famous hug scene he shows that despite everything he put him through he does care about his mentor.

Geddy is Otus's best friend, and Geddy usually fends off bullies (namely Fib and Bonacci) when they pick on Otus based on his disability. Geddy is one of the main characters and helps out Otus with his tasks. Otus carries Geddy by his shoulders, and the two generally support each other throughout their adventures. Among other things, Geddy consoles Otus when he goes to a special spot in Tropos which makes him upset, with the Boguin's shell that is said to contain the voices of the dead.

When Geddy leaves mid-game, Otus gets very upset when camping without him. As for Geddy, he behaves like a different person entirely when without Otus.[3]

Even though he attacked Otus to steal his cloak, Alphonse's first reaction to seeing Otus was to kindly say hello. He argues against keeping on fighting him after his turret is destroyed, effectively saving Otus' life, since he couldn't have dodged Dirk's attacks or even inflict him any damage at this point of the game. He teams up with Otus very quickly after Dirk ditches him, and become loyal to him very fast. He saves Otus' life by carrying him in the burning Dreadnaught, and sneaks into Vellie to check up on him after Advent. He thinks Otus is a better master, who acts for good.

Initially Otus and Twig were adversaries when Twig stole the relic from Vellie. After Twig is abandoned by Dirk, however, Twig became depressed and latched onto Otus as a new friend. Otus was quick to accept this, much to Geddy's dismay.

Solus and Otus are about the same age, and they met in passing, but were never properly introduced.[4] However, the ending dream sequence reveals that Solus sees Otus as one of his only friends.

Otus' parents are nowhere to be found in the game. Two characters, Lettia and Scops, who were probably his parents, are mentioned in the ending dream. Otus was raised by his parents[5], but Asio took him under his wing after their disappearance.

While patrolling Vellie, Mandolyn is mugged by a troublemaker, later revealed to be named Twig. Otus and Geddy chase Twig around to Vellie Cave. After a brief excursion in which Twig is not found, they exit to find the town under attack by pirates, which Asio blames on them. Fearful that they will attack the city of Advent, Otus and Geddy are instructed by Asio to shut down the Owl Temple; in doing so, they hope to disable the mechanisms that have been blowing the islands apart, allowing the islands to recombine and crush the pirate ships. Before entering the Owl Temple, Otus and Geddy encounter a mysterious cloaked figure that recounts the history of the owls; shortly afterwards, they disappear. It is in this temple where they meet two pirates, Alphonse and Dirk. After Alphonse admits he no longer wishes to follow the pirate leader Molstrom, Dirk leaves with Twig, and Alphonse joins Otus and Geddy. They press on, but find out that the temple has been shut down for ages. When they arrive to Advent, it is under attack, which Asio blames on Otus again.

With Alphonse's help, they sabotage the powerful pirate ship Dreadnaught. However, Molstrom throws Otus overboard and goes on to destroy Advent. Otus spends days unconscious after that. Asio refuses to talk to him afterwards.

Alphonse tells Otus and Geddy about the pirate's origins and the relics, revealing that the ancient owls manufactured them for their own purposes and that the relics contained unfathomable power when combined. Molstrom deviated from his command after the ancient owls disappeared, assuming control as the leader of the rest and seeking out the relics in order to obtain power. They go to the Floating Continent to get the third relic before the pirates, which they fail to do. After being dumped by Dirk, Twig joins Otus as they exit the place, but this angers Geddy, who goes away. They meet Twig's family and go to attack the pirate base and steal the relics. As they try getting their hands on a key, Molstrom goes to attack them, but is interrupted by Geddy bursting through the wall with a stolen mini pirate ship. Otus is thrown overboard once more, but Solus, who was the mysterious cloaked figure who appeared with to Otus and Geddy and also seemed to work with the pirates earlier, catches him and fly away with the relics.

The squad goes back to Vellie, where Otus reconciles with Asio, and the scientist Kernelle provides them with a means to reach the islands beyond Mesos (i.e. a rocket). When they arrive, they discover the Owl Library and find Solus trying to use the relics. Otus attacks to stop him, and Solus responds in kind, using the relics to fight.

After the battle, Solus reveals that the relics aren't tools of destruction, but energy storage devices that were meant to power the Anti-Hex, a machine to counter the rising of the islands. After the discovery of a strange phenomenon known as the Loop, Solus explains that the ancient owls worked desperately to find a way to break it; this lead to the creation of the Hex, which was intended to alter the laws of nature in order to do so. However, it was a catastrophic failure, and it resulted in the world's landmasses being split and forced to rise into the sky. Before Otus can activate it, Molstrom crashes into the library, demanding the relics; Otus shields Solus from Molstrom's anchor, dangerously wounding him. Solus the transfers the power of the relics into Otus' body. As Alphonse, Twig, and Geddy hold Molstrom back, Otus crawls over to the Anti-Hex totem and activates it. The machine sends a beam of energy towards Otus, who passes out. A light raises from him and floats towards Molstrom, before turning into an enormous energy beam, effectively disintegrating the pirate captain.

Otus then finds himself in a sort of dream, where he meets Vellie inhabitants telling him how much they value him. He gets to talk with a silhouette looking like Asio, who could also be Asio's look-alike from the ancestor holograms. After a brief conversation about the fate of the world, his silhouette tells him that it is not the end for him, but as it uses the expression "in this life or the next," it is unclear as to whether or not Otus is dead or alive.

The next cutscene shows Otus falling from the island into the sea below. 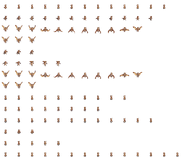 One of Otus' sprite sheets. 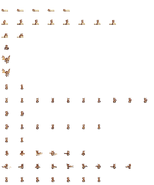 Otus falling as Advent is destroyed. 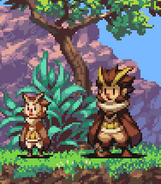 A design tree full of conceptual artwork for Otus

Simon's second finalized sketch of Otus. My how he's grown!
Add a photo to this gallery
Retrieved from "https://owlboy.fandom.com/wiki/Otus?oldid=1155"
Community content is available under CC-BY-SA unless otherwise noted.