Torques are an enemy in Owlboy. They can first be found in Vellie Cave, and in various places later throughout the game.

Torques are vaguely humanoid in shape, with big bushy white beards and white hair. It is uncertain whether the beard and hair is obscuring their faces, or if they do not have faces at all. They have dark brown antennas emerging from their hair. Their torsos are covered in brown fur, and their arms have tufts of dark brown fur coming off of them. They have two fingers and a thumb on each of their otherwise furless arms.

Torques will attempt to throw rocks at Otus, which will travel in a straight line until they hit Otus or a wall. These rocks can be dodged to break down some obstacles in the cave, namely the ones Twig leaves behind by stringing rocks up together with webs, or can hit and defeat other enemies.

Armored Torques can be found in the Floating Continent. They look the same as normal Torques, but protected by scavenged armor. Instead of rocks, they throw Wilk hives, which each spawn three Wilks. Their armor can be removed with a spin attack, after which they can be defeated like a normal Torque.

Vaguely humanoid, the Torque is known to be somewhat more intelligent than the average wildlife. However, its use of tools seems to be more instinctive. They tend to throw rocks at passers-by, and use their powerful arms to batter anything that gets too close. Although dangerous and tough, Torques can sometimes be useful, as their powerful rock throw will hit anything... even other enemies.

Despite not being organized enough to craft, Torques have still found ways to better defend themselves. Armored torques not only scavenge old armor and wear it as protection, but have managed to gently gather Wilk hives to use as projectiles against intruders.[1] 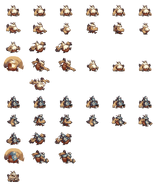 Spritesheet for Torques and Armored Torques.
Add a photo to this gallery

Retrieved from "https://owlboy.fandom.com/wiki/Torque?oldid=1115"
Community content is available under CC-BY-SA unless otherwise noted.