Buccanary
Trinkets are items you can earn by collecting Buccanary Coins and visiting the Legendary Adventure Emporium. Some will increase your maximum health points, some will buff your party members, and some will just give you the option of wearing a really cool hat. Collecting all the trinkets up through the Fire Drive will earn you the Trinket Master achievement, and collecting the Spectre Cloak will earn you the Trinket Grand Master achievement. 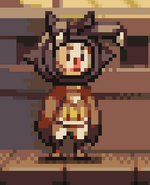 Otus wearing the Wollen Hat.
Add a photo to this gallery
Retrieved from "https://owlboy.fandom.com/wiki/Trinkets?oldid=588"
Community content is available under CC-BY-SA unless otherwise noted.